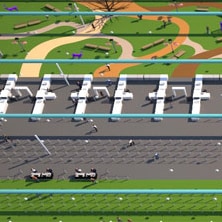 With more than 10,000 athletes staying at the village of 31 apartment blocks close to the Olympic Park during the Rio Olympic Games, there must be a fair amount of logistical problems for officials to face. Although the media doesn’t always hear about them, especially if everything goes to plan and there are no disasters, there will always be thousands of people working hard behind the scenes to make such a massive event possible.

This is something that AiQ Consulting has a lot of experience in! During the London 2012 Games, we worked with various contractors and clients to organise the Pop-Up terminal at Heathrow for the thousands of athletes arriving and departing London before and after the Games.

END_OF_DOCUMENT_TOKEN_TO_BE_REPLACED

Is Your Baggage Handling System holding You Back?

So what does this mean for airports and airlines? END_OF_DOCUMENT_TOKEN_TO_BE_REPLACED