Following on from our previous blog ‘A Clear Vision of UK Airports Recovery’ which focuses on ATMs and passenger traffic, our airport planners have also tracked Air Cargo activity for this year showing the impact of the COVID-19 pandemic, see below. 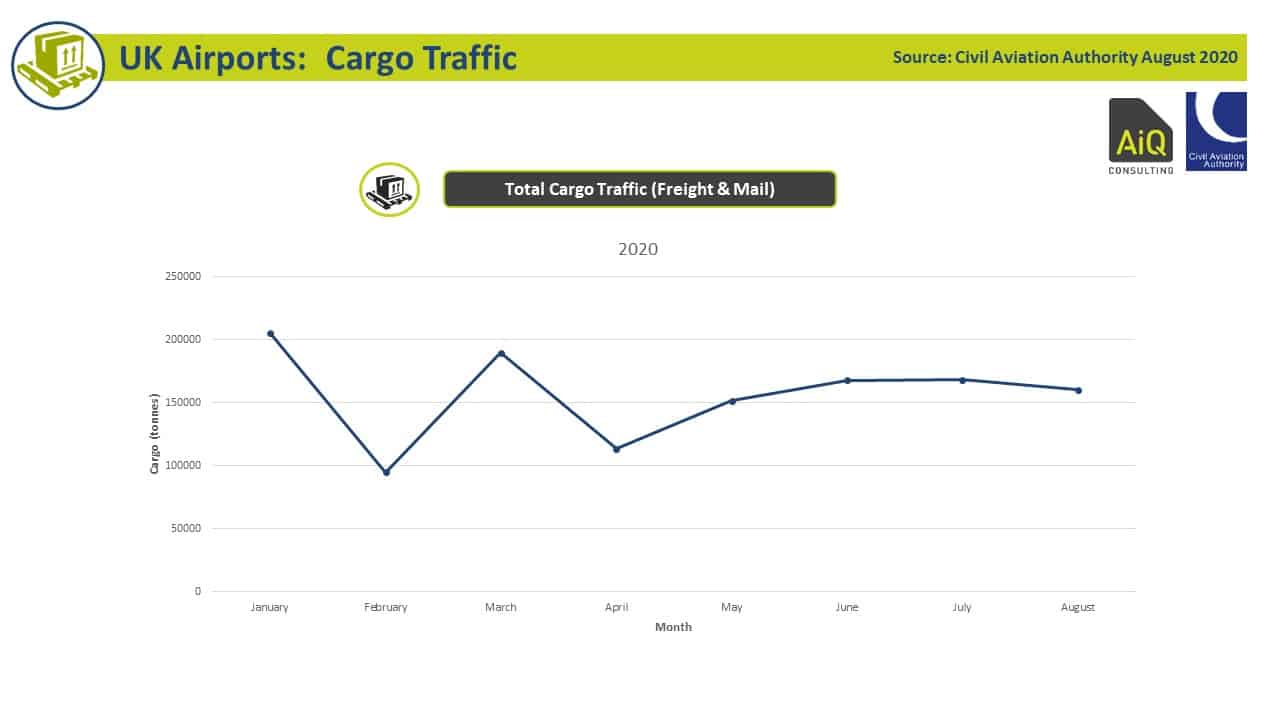 The raw data used to plot the above graph is extracted from Civil Aviation Authority (CAA).  The cargo data is inclusive of freight and mail, carried on both scheduled and charter aircraft. The plotted line graph shows an interesting history of activity over the year showing a slightly different pattern to the ATMs and passenger numbers.

The first quarter shows a zig zag effect. In January, cargo tonnes plunged from a total of 205, 063.919 to 95, 069.402 tonnes due to the early impact of the COVID-19 outbreak throughout the world, particularly China. This created supply chain bottlenecks having a knock-on effect to cargo traffic. Numerous cancellations of passenger flights reduced bellyhold capacity from the market, but capacity contracted more than demand. Read more about the Air Cargo growth slumps in February on the IATA Air Cargo Market Analysis here

March saw an up lift in cargo tonnes, returning to almost the same levels as January with the demand for Personal Protective Equipment (PPE) throughout the world, mainly China.  In response to this demand, dedicated cargo aircraft increased its capacity and some passenger aircraft shifted to cargo-only operations, this partially offset the decline in capacity. Read more about IATAs March market analysis

The decline in volumes accelerated in April to 113,410.738 tonnes due to depressed manufacturing activity and good demand worldwide as well as the reduction in bellyhold capacity from grounded passenger aircraft. Airlines continued to raise freighter capacity and started to convert passenger aircraft into freighters to help meet demand. Read more about IATAs April Market Analysis

As industry began to stabilise there was a slight recovery in June to 167,768.428 tonnes in June, but still below year on year. Airfreight lost some market share to cheaper and slower forms of transport. IATAs June Market Analysis

During July there is some economic activity recovery despite growing uncertainty about the containment of COVID-19 worldwide. However, the shortage of air cargo capacity continued to have an impact. IATAs July Cargo Market Analysis

There was evidence of a small decline in August due to a continuing lack of capacity which has caused a continuing loss of market share to shipping, but airlines react positively by reintroducing former 747s and 777’s converting into freighters to increase capacity.

In September IATA warned that air cargo could not rebound effectively without more capacity.

‘The rebound in cargo volumes has been slower than expected…. This is mostly because air cargo capacity remains insufficient, with industry-wide available cargo tonne-km (ACTKs) declining by 29.4% in August’. IATA continues ‘International belly capacity is still scarce, and airlines have not been able to raise dedicated freighters capacity as much as needed’.

As airport experts and data ‘nerds’ who provide clarity, the AiQ team are in their element – visually tracking CAA raw data and we shall continue to publish the visual representative of CAA statistics each month for the rest of the year to support airports in understanding the route to recovery.  As ACI Europe Ex-Director General, Angela Gittens states –

‘Effective decision-making will depend on a good understanding of what the path to recovery will be. Traffic forecasts will be essential for defining staffing and operational levels, capital investment requirements, and core business decisions on airport charges.

Predicting recovery with high levels of uncertainty and ambiguity may require airports to create entirely new forecasting frameworks that will be flexible enough to incorporate new inputs as better information becomes available.’

To find out how AiQ can help you make effective operational decisions and operational efficiency recommendations during this uncertain time, contact us or discover more about our Airport Recovery Planning Service.