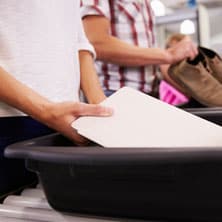 Recent contracts have impressed on our team just how much of an impact that new changes in technology have had on security at airports.

Online check in, 2 step bag drop, and other hold baggage systems and baggage handling advancements have made the check in process much smoother and easier for passengers and airlines, but what does this mean for the security of airports?

As our work with passenger flows and holistic terminal capacity assessments has shown, with contracts such as Eurostar and Leeds Bradford Airport, if you relieve or ‘solve’ a queue in one area of airport, the queue will move somewhere else! This is even more apparent with new check in technologies and security requirements.

Landside queues, in particular, are a severe bomb threat and a risk for security. This is in the same way as a high density of people at events and tourist spots becomes a problem from a security perspective. It is the large amount of people at a high value target, as well as the lack of security (as opposed to airside) that makes it an attractive target for terrorists. Reducing the queue and density of people landside is massive security benefit. It is well known within the aviation industry that you are 300 times more likely to die landside at check-in or the arrivals hall then walking down the street. In comparison, being airside is seen as 300 times safer than walking down the street.

However, reducing the queues landside brings the obvious benefit but also disadvantages. One disadvantage is that passengers may turn up later for their flights, another problem for security. The other is that reducing queues landside increases dwell time in the departure lounge, which is great for retailers, but not so good for passenger satisfaction if your departure lounge is too small.

This departure lounge problem, and the impact that security has had on the structure and layout of airports, is shown perfectly by the comparison between two terminals at London Heathrow. For example, Terminal 5 is an older terminal, built before 2001. Two thirds of its space is landside, and therefore in 2017 usually empty. The other third of the space is airside and full of people. Compare this with the new Terminal 2, which has the opposite dimensions, one third landside and two thirds airside, and far more comfortable and efficient for passengers.

Other Security Issues for Airports